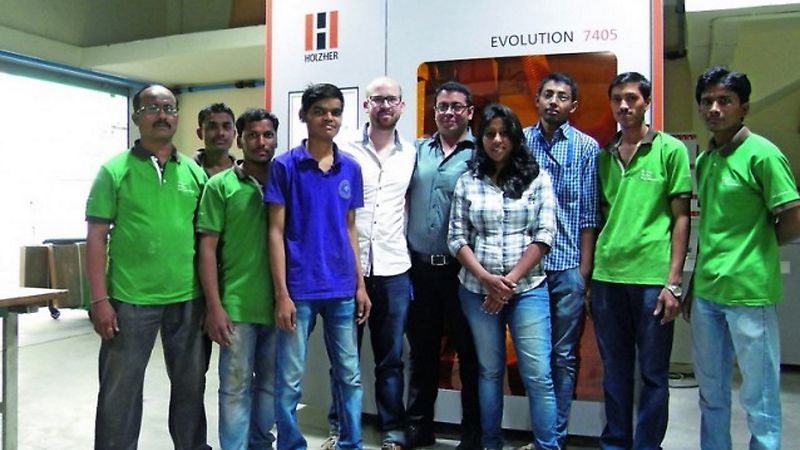 For two entire years Klaus Nusser supervised construction of a carpenter shop in India. He produces furniture for billionaires and lives among the poorest of the poor, often distraught, he always manages to get a hold on himself.

[...] Nusser’s job is to plan a new workshop for Utturkar’s Wood Culture. In India the company sells connectors, fittings and other furniture accessories from Germany and Italy – among others from Kesseböhmer, Grass and Hailo. To equip the showrooms, proprietor Tarek Utturkar, a master carpenter trained in Germany, also runs a carpenter shop. But the workshop, warehouse and office are spread over the sweep of a city with 5.9 million residents. Driving times of over one hour are not uncommon. Moreover the demand from the private segment is continuously increasing. “Up to now most high quality furniture has been imported”, reports Nusser. “It’s hard to image, how architects reacted, when they learned that the products were produced in India. We were completely equipped.” The furniture and interior decoration department was therefore intended as a central pillar for the Utturkar Enterprise. When things get complicated, Nusser frequently operates the saw himself, building, for example, a desk for one of the world’s richest men and furnishing his house with kitchen and bathes.

[...] On April 20, 2015 The BM editorial staff received an email: “My company is finished.” The before/after comparison is impressive: While the old workshop was chaotic and dark, the new building make a friendly, structured appearance. It is filled with machines from HOLZ-HER: The vertical CNC Evolution 7405, the 6 m long 1327 Sprint edgebander and the smaller 1310 model. The Utturkar brothers purchased a relatively new Martin circular saw with digital display and took the Häusserman veneer press from the old workshop. The compressed air is supplied by a Kaeser screw-type compressor, while a stationary as well as a mobile exhaust system from Al-Ko provide for evacuation. The electrical tools from Makita are beginning to show signs of wear and an old Lamello milling machine is also present.

“Get me a CNC technician”, demanded Klaus at last, because up to new he is the only one capable of operating the CNC machine. So he gets a man, who doesn’t even know what a miter joint is. “This is India. It works”, is the answer to the frustration of the German in the face of such incidences.

And now that everything is finished and running as planned, Klaus is beginning to think about staying in India for another year. But at the bottom line, his homesickness gets the better of him. His last email from Pune arrives on May 29, 2015: “I’m almost in the plane. Finally!“ [...]