The symbolic groundbreaking ceremony on the Holz-Her production facility in Voitsberg, Austria, signaled the start of an ambitious forwardlooking project. The 22,000 m2 site of the specialist in machines and systems for panel processing is being developed with a 1,000 m2 extension specifically designed for the planned new CNC milling machine for framework processing. 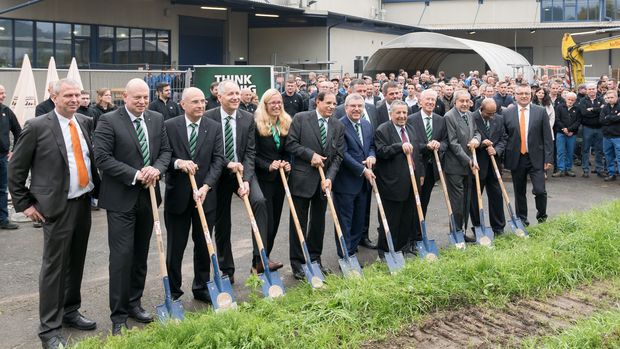 The new hall will exclusively accommodate new and pioneering machine technology for the machining of large steel structural components. Holz-Her's intention is to make its production even more efficient and flexible.

The project was approved by Weinig's Supervisory Board as part of a series of planned investments. “Our decision is a deliberate response to the growing importance and huge potential of the Business Unit Panel Processing,” says Chairman of the Supervisory Board Thomas Bach. Holz-Her has been part of the Weinig Group since 2010. The innovative company can look back on an extremely successful last few years. Turnover has risen by 20 percent over the last two years alone. Just recently, Holz-Her attracted massive attention at the world's leading trade fair LIGNA with its Nextec technology for furniture production. As a result of the strong growth, production capacity in Voitsberg has already doubled over the last two years.

The investment of 4.5 million euros is part of a group-wide investment package of more than 15 million euros and will secure the future, long term growth of the company. To reflect the significance of the project for the future of the company, the groundbreaking ceremony was attended by both Weinig's Supervisory Board, led by Chairman Thomas Bach, and Weinig’s Management Board, represented by CEO Wolfgang Pöschl, Chief Sales and Marketing Officer Gregor Baumbusch and Chief Financial Officer Gerald Schmidt. Together with Holz-Her Managing Director Frank Epple and the Managing Director of the Voitsberg production facility Harald Steiner, the start of the construction project was marked with a small ceremony attended by all personnel.

The investment will also have a positive impact on the employment situation at the Holz-Her production site. Currently, 300 personnel are employed in Austria. Thanks to the further expansion of sales activities, the extension of the product portfolio with regard to CNC processing centers, the development of the saw/storage combination segment, the further evolution of edge banders for industrial applications and the extension of the factory, Frank Epple anticipates further requirements for qualified personnel. “Holz-Her, like the entire Weinig Group, is on a strong trajectory,” says Wolfgang Pöschl. Group orders to the end of April showed 17% growth while revenues rose by as much as 21%. The Weinig Group is very confident of achieving the order inflow of 471 million euros targeted for 2017. Owing to the excellent business growth, the group’s global personnel will increase to more than 2,100 in 2017.